An increasing number of people are looking at the detailed mode to see what trains are going past their windows. We’ve had an increase in the number of queries about train reporting and whether something is reporting or not, so I thought it was right to write a post about.

Realtime Trains does two things over and above what we are provided from our sources about a normal train service: it infills intermediate locations in schedules and provides forward progress forecasting. These are shown in grey type in the working timetable, and grey italic in the realtime reporting columns respectively. Schedule infill normally happens by 2pm the day before operation, so before then you’ll normally see schedules only contain their calling and mandatory timing points. The real-time column will appear at the same time except if the service runs as required: in these instances it’ll appear when the train is ‘called’ (activated) in TRUST. 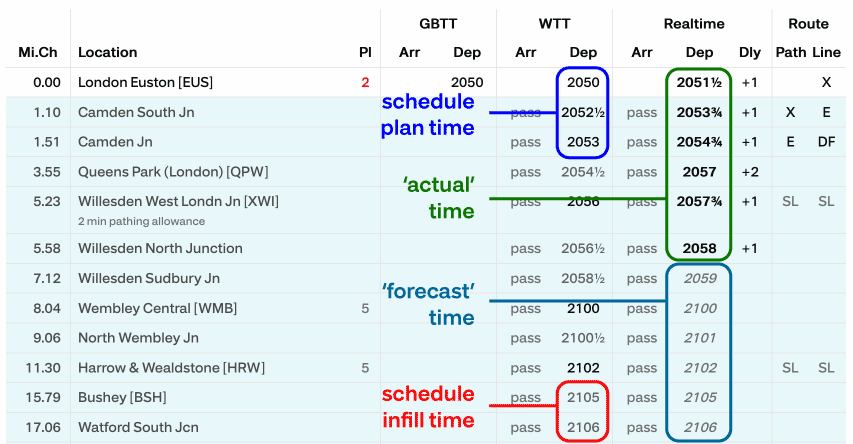 There are two primary sources of reporting input into our service, both provided by Network Rail systems. These are through the signalling Train Describer and the TRUST (Train Reporting Under System TOPS) system.

You can find the source of any real-time report by, in the real-time column:

The reporting source will, nearly always, be the source system followed with some additional information in the brackets. The sources that you will typically see are as follows:

You can find more information about our processes around the Train Describer by looking at my previous posts on this subject. The two character identity in the brackets references to the train describer area code. There is a list of area codes, and their description, on our Train Describer status page.

With all of the reporting methods, there is a potential for error. It should be noted that some signalling areas have been known to report a train manually in order to clear it from their displays and, therefore, manual reports should not be necessarily taken as read unless there is more than one report to corroborate with.

Tom is a company director and only software developer at Swlines Ltd. He works on Realtime Trains, RailMiles and consultancy projects for clients. You can follow him on Twitter.